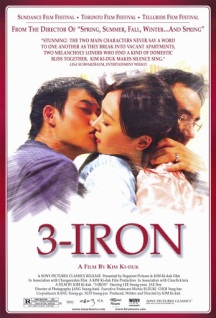 Summary
3-Iron, or Bin-jip in Korea, which means Empty House, is about a young homeless man who jumps from home to home while the occupants are away. He usually leaves a menu on their door, and upon finding whether that menu has been removed or not, he will determine if anyone is home. The young man, Tae-suk, meets an abused woman after breaking into her house without knowing she is there. Together they seek a place of solace away from their normal lives of reality.

My Thoughts
Out of all the movies I’ve been give so far on the list to watch, this one was by far the most beautiful, and one of my new favorites. Kim-Ki-duk did a wonderful job of creating a story in a world where most stories seem like they are becoming repetitive.  We have all these very interesting characters piled into one movie, and the two leads never even speak.

Also, I have never watched a Korean film, so I was excited to get started on exploring foreign films more.  The dialogue is very sparse so you don’t have to consider how well you will have to follow along with subtitles if you don’t speak Korean.   The two actors that this movie revolves around do such a good job at acting that you don’t even really need speaking to get the depth of their developing feelings. The chemistry between them is tremendous.

Kim-Ki-duk shows his creativity brilliantly in this film. We feel a lot of magic happening, but he never uses any special effects to capture this feeling.  There are some very weird moments in this movie that also make it very quirky, so it never feels typical. Honestly, though I found this movie to be one of the most romantic movies I’ve watched. I think my lack of knowledge about Korean culture leaves me uncertain on how to feel about some things in the film though. I can’t make a full judgement on the characters decisions because from what I have observed about Korean marriage is that it is much more rigid, and traditional that what I’ve perceived in American culture. Divorce has never been an option in any media I’ve viewed that features a Korean marriage no matter how bad the situation is.

This film was a hit at the 2004 film festivals, and I can completely see why. It is unique, romantic, magical, and deep.  For someone beginning to explore what other countries have to offer as far as movies this is a good starting place. With good performances, and a great story this movie will make it almost impossible to turn away.