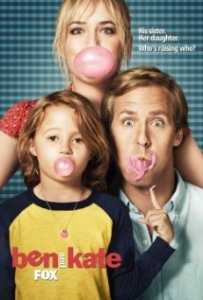 Rarely do you see shows committing a whole plot around a brother and sister. Usually it will feature a huge family to cushion the plot, or it will be about siblings of the same sex. Ben and Kate is a modern family where no one seems really grew up, which is why it might take the both of the brother and sister pair to contribute their skills to raising Kate’s daughter.

Kate Fox finds herself pregnant, and abandon by the guy who got her knocked up. Five years later she is mother to Maggie, and manages her own bar. Ben Fox is older, but not more mature. He doesn’t have a job, and he’s a bachelor who finds his one and only love from the past is officially moving on. Where Kate lacks in fun, Ben makes up for it with his crazy tactics. The two find themselves merging back into each other’s life to bring the maturity, and fun that Maggie may be lacking.

Ben and Kate has a good many funny moments, and from all the actors. It isn’t one in particular that throws out the comedy. It probably reaches a little too much for heart though when there doesn’t seem to be much to have at times. Also, where this show could have been a good family show it messes itself up with sex.

Dakota Johnson brings the stresses of motherhood, and the comedic value very well. The scene where she tries to get her shirt off makes no sense, but for some reason it is funny. Nat Faxon is funny at times, but I didn’t feel for him at all. He seems like one of those men in life who are ruining society because he won’t grow up. Hopefully if the show continues to get a chance we will see progression from him. The other notable actress is Maggie Elizabeth Jones. She’s young, but she has so much sass for her age. The only other characters I remember who seem to be regulars are Tommy, and BJ, portrayed by Echo Kellum, and Lucy Punch. While Punch was forgettable, Kellum didn’t have as much presence.

If Ben and Kate ever went for heart then I didn’t notice. It got lost in Kate’s desperateness to have sex again before even really knowing a guy. It seems as a mother she would ask herself “would I want my daughter acting like this one day?” Had it not had these things it would have been a good family comedy. It still could make a great companion for Raising Hope when it returns if they can gear it into more of that direction instead of  New Girl crossbreed.