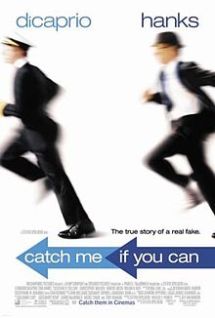 Though Catch Me If You Can is no Schindler’s List, or Jurassic Park, it still shows that Steven Spielberg can take a story of any genre, and catch the viewer with it. He tackles of the life of Frank Abagnale Jr. Though like most his stories we feel a little void of emotions, but we have an intricate movie to keep up with.

Frank Abagnale Jr. is watching his family fall apart as his parents finally grow toward a separation. He’s finding a new hobby in impersonating others though beginning with a substitute teacher of his class. He moves on to grander things though like a pilot, who he also gets legitimate checks from while impersonating. This causes a stir in the secretive service who now has to catch Abagnale before he is able to steal anymore money, and this hunt is led by Carl. He finding that he is having a hard time keeping up with Abagnale as he moves state to state, and country to country in order to keep them far behind his trail.

When you have stars like Tom Hanks, and Leonardo DiCaprio leading the cast you know the movie will at least be well acted, but you also have a huge supporting cast that includes Amy Adams, and Martin Sheen. You can tell the actors are having fun with their roles, which makes for a fun, and lively film full of very interactive characters.

Leonardo DiCaprio had already established good repertoire with a role in Titanic, but after furthering himself slightly from the teen hearthrob phase he found this role. He proved he had the acting chops to go on to star in many more films. As Frank, he is young, and full of life. He also seems to have picked up the accent he also carried into Shutter Island, a movie based in the same era.  There is also Tom Hanks who does a good job as Carl. I would say that it’s difficult not to imagine Hanks as a likable character in anything. Amy Adams also she has the range to act as well. She is sort of a naive, and badly used girl in this movie, and you don’t know quite what to think of her.

There seemed to be a level of emotion missing throughout for me though. There wasn’t any truly dislikable characters in the film. At the same time I wanted Frank to be caught, but I also felt sort of bad for him, and wanted him to have a life where he could succeed. Carl also isn’t a guy you can dislike. You feel a lot of conflicting things, but not anything very strong.  This movie does pick up after a slightly slow start, and grows into something that keeps you watching from there.