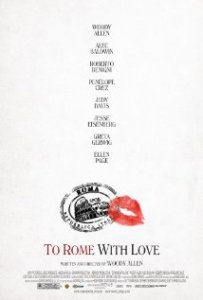 Not everyone can relate to artists, actors, and writers leaving in Rome can they? They can’t, but one can dream I suppose. To Rome With Love is a visually stunning movie. With all the food and buildings popping with color. What may be difficult to get around is the characters who are difficult to relate to. The movie though does deal with Woody Allen’s style in the heaviest. With plays on everyday fantasies and comical sayings by making them a reality. It’ll probably be a movie only the heaviest Allen fan can like while others will be more focused on the confusion of the unexplained parts.

Summary: Several different characters are brought to Rome for different reasons. Antonio and Milly are newlyweds who are split apart for the day after Milly becomes lost in the city, it leaves Antonio on a date with a prostitute, and her with a huge Italian actor. Leopoldo finds fame unexpectedly when reporters focus on him as a new celebrity and follow his every move. There is also Jerry who finds that his daughter’s new love’s father has a talent for singing in the shower, and wants to have a play with him leading the opera. Then there is Jack who is caught between the new affection for his girlfriend’s visiting friend, Monica.

Acting: The acting is quite superb in the movie. Everyone seems excited and into their characters, even Jesse Eisenberg who usually seems about as happy to be there as a doorknob. With the huge cast there has to be some characters that just disappear behind the more exciting ones like Milly and Antonio, whose endeavors are less than exhilarating anyways. Ellen Page is the stand out though as Monica. Somehow she really does draw you into the character, and conveys who very quickly changing feelings very well. Alec Baldwin, is well like himself in all those commercials you seem him in now, and I keep wondering how he played a character so calmly that was so confusing.

Filming: What does really stand out among the jumbled stories is the visual color. It pops so much that it is difficult to stop watching the movie. There are scenes where the characters are browsing the markets, and or walking through the city that are just beautiful. There are lots of warm colors that flow throughout the movie in oranges and reds. It has the texture that much of Midnight In Paris did though, so if you want a movie that pops it is one probably to go to instead in his work.

Plot: The plot is where I think most lose this movie. There are one too many characters, and had it been trimmed down to a few it would have been much better. Like the couple that loses each other in the city, and the guy who becomes famous could have just been cut out. You also have Alec Baldwin’s character who really you just don’t get. He is supposedly Woody Allen’s older self talking to his younger self, but since the explanation is so vague as to how the other characters interact with him and such it does take away from the flow of the story.

To Rome With Love will be for fans who like the style of Woody Allen’s work. It does have some interesting story lines that compel you. The setting seems to be on that is imitating bringing the stage to life as if everyone is on the same stage in Rome, and we are just seeing an observer provide commentary on the lives that run through Rome. That is fun, but with one too many stories you do lose it at some point as far as plot. The colors, comedy, vibe, and acting do revive the movie though.