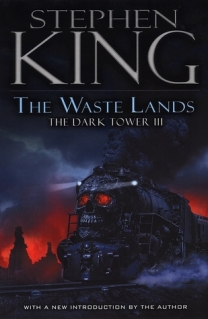 With Gunslinger we’re introduced to the central character of the novel. Then with The Drawing of the Three we are introduced to the other characters deeply involved, and then with The Waste Lands were are finally on our way to the Dark Tower, but with the arrival of one last crew member. Where the others built up the characters to power the other books in the series, this book finally churns out where we are going, and how we’re getting there. Thankfully, I wasn’t reading this book upon it’s release though, or I would be left with a huge cliffhanger.

Summary: Now Roland, Susannah, and Eddie are in the woods after moving from the beach, and encountering plenty of oddities and dangers of Roland’s world. Many things are also taking place with the crew themselves including new paradoxes of the mind, and lots of odd but very telling dreams. Also, things are happening from the world that Susannah and Eddie left behind in New York City that still need to merge over with them to line everything back up again. The three will deal with this though as they continue their pursuit to the Dark Tower.

Characters: The characters just become more likable in this novel, but most of their development seemed to take place in the prior ones. Now they are having to utilize the strengths that they garnered in the previous ones from their transition to work together in this novel. I thought some characters in this novel also contributed to the eerie vibe of the novel quite well like Blaine. I think Blaine is one of the most horrifying characters I’ve read in the past year. I’m still trying to identify why that was? Maybe because of the fear he brings about that you feel as a kid. Susannah I think is also one of King’s better written female characters. She seems to embody being strong, but feminine well.

Writing: Stephen King probably doesn’t get as much credit as he should yet for his writing because of his mainstream success. He has a way of capturing the way characters speak in their dialogue that feels very real, and true to the character. Like when Blaine is speaking, it is in all caps. I think people get too caught up on making things look grammatically clean on paper, that they forget words can have a lot to do with how you visually imagine something as well. Writing the characters in big format provide that big, intimidating feeling to Blaine that works. This goes the same for other characters.

Plot: The plot is one that reads like fantasy sometimes, and the other times horror. I think it merges the two genres well. I also like the attention to characters as well, and the plot doesn’t leave them behind to try to create action or appeal to people. The characters grow appropriately from the action. The plot builds up so much to the end that for some you’ll feel you’ve been left on a cliff while the story is moving on without you.

The Wastelands progresses the series nicely. It is a novel that feels like it is finally connecting where the novels are going. The second are the characters, this one is where we are going, and the next should be when we get there. Stephen King knows how to get the audience attached to the characters, and leave us anxiously waiting for the next novel and what will happen to them.