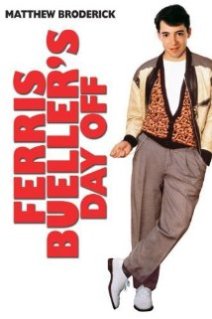 With The Breakfast Club and Ferris Bueller’s Day Off, and among other writing credits, John Hughes shows he just knows how the teenage mind works, and instead of bashing or throwing off on it for being a different generation than his he instead commends a lot of the aspects of the fun of just being a teenager. To be honest, a lot of teen movies don’t capture the true identity of being a teen anymore. They focus on all these very warped aspects that make it look as depressing as it is being a teenager. When I was a teen I didn’t need to have a pity fest with the movie I was watching, I wish instead I just made myself live in a realm for a few hours where being a teen was actually cool, and not everyone had to look really pretty and hot, but for some reason you all still really despised authority.

Summary: Ferris wants a day out of school, so the best way to do that is fake sick and get his parents to believe him. There is one adult though who isn’t going to be quite as easy to get rid of though, his principal, Mr. Rooney. He is now set up outside his home looking for proof that the days he’s been absent are all lies. Ferris though is out living it up, and even persuades his friend Cameron to get out of his sick bed and join him, and makes a plan to get his girlfriend out of school so they can all live it up in the city for one day.

Acting: Matthew Broderick is the lead as Ferris. Younger Broderick was the perfect casting for the role because he doesn’t look like a jock nor does he look really nerdy. He looks like a normal guy, so it’s easy for guys to relate to, and girls would find him cute. Alan Ruck as his friend, Cameron, is well cast too. He has this very dorky nature, but by the end his transformation is something that is easy to relate to, because a lot of teens do struggle to make that transition where they began taking themselves seriously and reverse their roles from being treated like a kid to convincing their parents they are on the verge of adulthood too. Who knows why Mia Sara didn’t have a career after this? She compliments Ferris well as his girlfriend, Sloane. Then there is the recognizable Cindy Prickett as Jeanie, who you might remember from Dirty Dancing if you watched it.

Filming: I like how bright and lively the movie it is. It matches the youthful tone that is reflected in Ferris’ nature.  The story also intermingles the humor and serious nature of what the teens are going through as well. It’s not all fun and just care free, but there are serious concerns for them as well. The scenes aren’t going to break the mold of being inventive, but I like how the humor is shot and makes you laugh, and how you also get good character growth.

Plot: There are characters that are likable and good guys, and some that are just bad guys all the way through. This works and it gives you people that are easy to become attached to and others you can disassociate with. I guess the character growth that is a little less clear to me, but no big deal, is Ferris. I think it’s better to leave the other characters around him with more serious business, because sometimes it’s not always the lead that is getting the worst of problems, sometimes we are only observing others problems that are worse than our own. Ferris starts out with a witty nature, a cute girl, a bright future, and supportive parents, and he ends with the same as well. He is set to be as likable to us as he to his peers in the movie, and he never comes off too arrogant to be unlikable.

Ferris Bueller’s Day Off is a well cast movie that gets us to cheering the teens on, and in a world where we seem too quick to bash the next generation it is nice to see a director who just wants to highlight the time of life he feels people should embark on fun while they can. You get pulled into every character, and particularly even concerned for some like Cameron.  Even though Ferris has made things happen in one day that people can only dream of, something about him just makes him feel real to us.