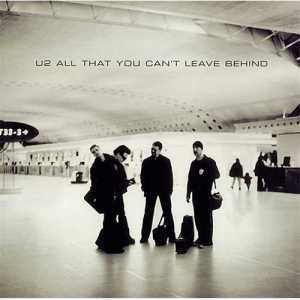 It seems that the best of U2 features the producer Brian Eno. He had disappeared from other efforts, but this one and the other I listened to, Achtung. It seems he has the magic to make their albums pop. This album reached a lot of critical claim, and once again after burning out with audiences on their previous albums they need something to once again revive them, so with the tenth album they rung in 2000 with a vamped up sound.

History: The album was much more well received than their previous albums they had doing for the past decade, and it returned to blend the sound from the 80’s back into their music more.This album was also the first album to be nominated with two songs in one category for the Grammy’s. A lot of the songs have personal meanings as well like “Stuck in a Moment” which was written by Bono after the death of his friend, the lead singer of INXS.

Vocals: Bono has really great vocals and that hasn’t faded over time, and with All That You Can’t Leave Behind I think he is utilizing better than he ever has before. His vocals have a lot more passion and emotion toward the lyrics than the other album I listened to, and while he had some nice emotive lyrics with Achtung, there seems to be some deeply personal things you can tell he is dealing with in songs like “Grace” and “Stuck in a Moment”.

Instrumentals: The instrumentals are a tad different, and I think they return to a little more of rock rooted sound. The Edge contributed to not only the guitar but piano and other instrumental arrangements as well and shows a lot of talent on the instruments he brings into the album. The instruments work together to really create an album that sounds good, and it has an emotional impact as much as the lyrics and the vocals do themselves.

Recording: The album is not about 13 years old, and it has stood time well. I think a lot of influences can be attributed to the sound of the album as well. U2 was a band releasing their tenth album, and had been around since the 80’s, and they come back with an album that tops charts and introduces them to a new audience like me that was becoming teens at the time. The span of their audience really does make them one of the hugest bands there is that has been able to also merge successfully with time.

U2 is one that I’m liking more with each album. I think this is one is better and more enjoyable than Achtung, and there are more songs I could personally relate to more. You also have “Stuck in the Moment” which I remember hearing all the time as a teenager going to middle school classes on television the morning before I got to school. It was just something very suiting to hear as a teen stuck going to middle school. I like it still as much as I did then.