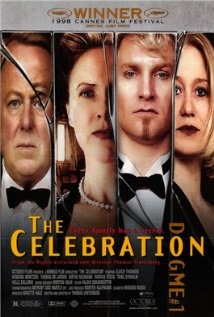 The Celebration was definitely different than I expected. The thing is I still have no idea exactly what I was watching. It starts off as what appears to be a normal family get together. You got your messed up members, your normal ones, and some dark family secrets. Well maybe that isn’t apart of every family, but it was apart of this one. Thomas Vintenberg’s direction of this movie is what makes it unique. Carrying us through the get together as if he is holding a hand held camera makes us feel we are sitting in for a very awkward family gathering.

Summary: The father of the family is turning 60. He is planning to celebrate with all his family and in style at a castle like setting. His kids seem to have grown up and became decent people at least in his eyes. One of his sons is running a grill bar, one manages a restaurant in France, and the other sister is an anthropologist. The oldest sister though has just committed suicide, and this shatters the image that the family had established and leaves one son, Christian, feeling he needs to express the dark secret that leads to her death at the family birthday dinner.

Acting: The acting is great, because with the documentary style shooting the characters need to feel very real, and they do. Somehow the way that Ulrich Thomsen also portrays Christian makes the whole situation very eerie. The way his family treats him after the big reveal is disgusting as well. Thomas Bo Larsen plays Michael, the song running the grill bar, and I don’t think I’ve watched a bigger jerk in a movie. His character is highly annoying, and maybe the explanation is supposed to be he is a product of the man he was raised by, but it just doesn’t seem a good enough excuse for how he treats his family and women. Paprika Steen in the only family member I felt was vaguely normal. She has a boyfriend who is a different race, and this gives the movie a different level of dynamic to step up the tension as her family is a bunch of snots who are uptight.The only thing that I don’t quite understand is why Pia is on the movie cover, since she wasn’t a huge part of the movie as Trine Dyholrom.

Filming: What might be the stand out trademark of the movie is the way it is shot, which honestly takes some getting used to. The camera is shaky and peers in from angles as if we are almost just peering into the family, but not exactly right there with them. As someone who was struggling with a headache while watching it did take some time to get through. It was a good way to shoot this type of movie though, and the colors in the place this is set in makes the whole movie very dark in atmosphere.

Plot:  The movie almost seems to have no direction when you first start watching. You get that a sister has just committed suicide, and it seems a little too soon to be having a party for any type of situation. Maybe this does give some early insight into the mental state of their father. Then when they finally sit down for the birthday dinner and Christian pulls this crazy stunt of having his dad pick between two speeches you know it’s about to get a little crazy. What he reveals was something very startling and from there you can’t stop watching.

The Celebration is a movie that did surprise me in how compelling it was. The characters feel real, but they also feel like people you can’t relate to. You don’t walk away from the movie having carried away any feeling from it except feeling disturbed. Maybe that was what the director intended, and it’s done well, but it makes it something not really you want to watch or live through again.