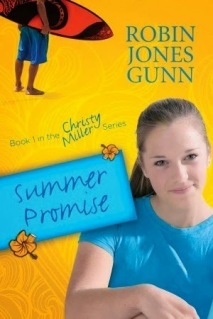 Summer Promises was released in 1989. To be honest the book has aged well as I couldn’t tell it was from 1989 minus some different language used then that isn’t used so commonly by teens now. Gunn though looks at Christy the eyes of a mother more so than another teen might look at her. She shelters her, coddles her, and assumes that she might be surrounded by the impure acts that teens can get involved in, but would never actually do herself. We get a perception of a teenage girl through a worried mother’s eyes, than how a teen might actually perceive themselves.

Summary: Christy Miller is leaving her home in Wisconsin for the summer to spend time with her aunt and uncle at the beach. With the growing frustration of finances at her home her family feels it is best for her to spend it somewhere more enjoyable. Aunt Marti wants to help Christy transition more into a teenager. Christy doesn’t seem very confident about her dress or appearance, but with a makeover her summer seems more promising for dating. After meeting Todd though she finds boys are a little different than she expected, or at least he is. His attention is placed on someone that is above the shallow things that Christy hopes will get his attention.

Characters: I don’t know why but many of the female characters in Christian books are so annoying. They usually seem to always be PMSing. Christy has these freak outs and melt downs that were embarrassing to read. I know I’ve acted emotionally before, but never over a wrong assumption regarding a boy. She seems to grow very attached to someone who hasn’t been very open about how he feels too. Todd never initiates much between them. He never gets physical, doesn’t ask to kiss, and even invites other female companions on their dates, yet she pursues him with the tenacity of a stalker. Todd is a bit of a likable character, but he doesn’t seem realistic. I hate to say it but I’ve just never known a guy or boy at any age of my life like that. Plus, I was very confused by the age of Christy. She seemed more like 12 instead of on the verge of going to high school.

Writing: The writing style seems like something a bit suiting for those younger than the 7th grade and up reading level that is given for the book. Now the content seems more suited for those who are middle schoolers, but I’ve never heard a kid that age talk the way these do, then again maybe in the 80’s kids acted a little younger than they do now. I also didn’t feel Christy was a very strong female character to be portraying to females.

Plot: There are female characters in novels that act like females, but you still can walk away feeling something inspired from them. With Christy I didn’t feel empowered as a female after reading. I just felt like this makes girls look really insane. I get that the transformation was that Christy was turning to Christ, but it just felt very cliche. I assume it has to do with the early 90’s trend that moved into Christianity, but I think that the approach taken in this novel might be a bit outdated. I saw plenty of kids and teens find Christ in this way when I was younger, and it just never seemed to be this very deep life changing thing that stuck with them after they left school. It’s sad, but it seemed the deeper people delved into their theology as teens the more likely they were to have more deeply rooted faith.

I think as a nice, fun, and more innocent read this book works for younger girls, especially for parents wanting to try to open a conversation with their daughters who are becoming teens. Now the best teenage Christian fiction I eve read though was the Diary of a Teenage Girl novels. They may read different now that I’m older, but I just found they were much more complex, and easy to relate to as a teen, plus the teens in those books actually sound like teens.

This book was provided by Waterbrook Multnomah Publishing in exchange for a review.